I was reading a paper on leveraging Twitter as a source for adverse events (AEs) reporting for pharmaceutical drugs (DOI). I found this paper by accident when I was visiting Twitter’s engineering website, specifically on their research publications web page. You never know what you are going to see, until you see it.

The paper’s abstract is to solve one problem with traditional reporting for AE. Instead of relying on doctors and pharmacists to collect AE reports from patients, harvesting data from Twitter might be apt under the impression that patients nowadays prefer to use social media to share their experiences consuming certain kind of drugs, because that might be more convenient for them. Recording data for AEs is important to know the worst possible outcome of consuming certain drugs.

For example, drug A won’t be effective to person B, because person B might have a genetic problem that would make drug A to be really dangerous when consumed (pharmacogenomics). This piece of information is important to make sure drug A is effective for everyone, or we can warn people about its worst potential outcome.

But there is one problem with that. Having doctors and pharmacists to record and curate AE reports eliminate one big problem: signal-to-noise ratio (SNR). Such luxury is hard to obtain with social media. Let’s take a quick look at their methods. 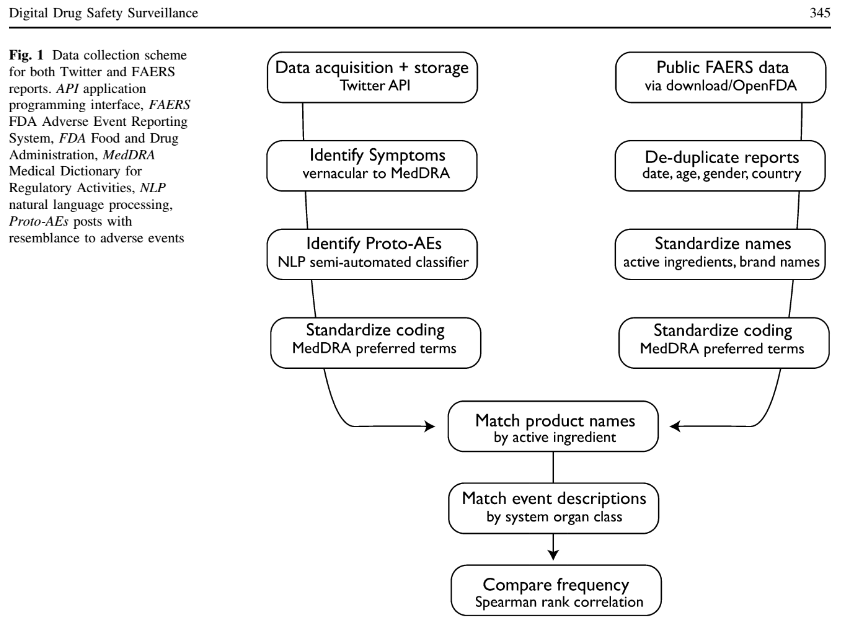 They also filtered for vaccines for influenza, HPV, HepB, and DTaP. I am not going there.

I am not going to bore you with the algorithm used to classify the proto-AE reports. Instead, let’s take a look at the numbers.

Out of 6.9 million tweets, the algorithm filtered for potential proto-AEs, comprising about 61,401 tweets. From there, only 7.2% tweets were manually classified as being proto-AEs, while the rest were not. From those 7.2%, we now arrive to this chart. 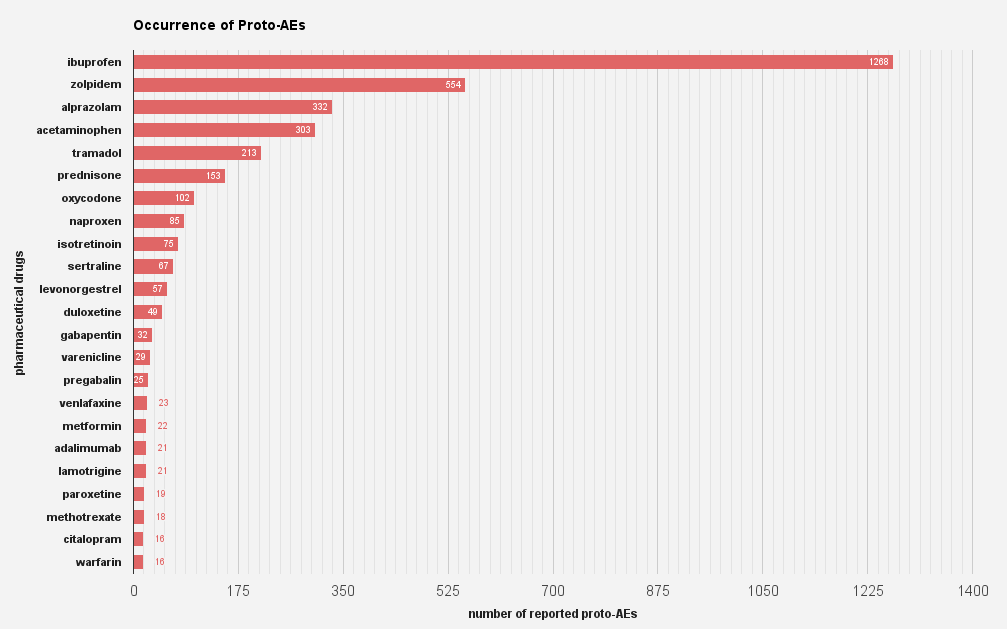 Click to enlarge the chart above. It is interesting to see people were complaining a lot more about ibuprofen (painkiller). Common off-the-shelf ibuprofen comes in 200 mg pill. For it to work, the dosage varies for different applications. For fever: 200 - 400 mg, to relieve inflammation: 400 - 800 mg. Treating severe pain might not be enough with just ibuprofen (NSAID). You might need to consume oxycodone (opioid). Thus we can infer that either people were not taking sufficient dosage, or wrong drug.

I was interested to see look at the proto-AEs concerning mental health. Alprazolam (Xanax) scored the highest (332 proto-AEs), followed by Sertaline (Zoloft, 67 proto-AEs). However, I don’t feel comfortable to draw any conclusion from this data. This is because, based on what I heard, people with mental illness with try their best to keep other people from knowing they have issue with their mental well-being (and this might include tweeting as well).

Here I have 3 suggestions: