In Genetic Engineering (GE) course I am taking this semester, I’ve learned how to do few things the longer way. Plasmid mapping with polar coordinate graph, drawing standard curve for each gel electrophoresis, running cesium chloride density gradient ultracentrifugation, among other things.

There is one thing that caught my attention in particular: logarithm. In the first few lectures, we were introduced with the concept of DNA traveling in agarose gel. To analyze the size of DNA, the commonly used technique is through gel electrophoresis. You take DNA samples, load them into agarose gel, apply electric field to the agarose gel, then the DNA samples will start moving from negative end to the positive end. 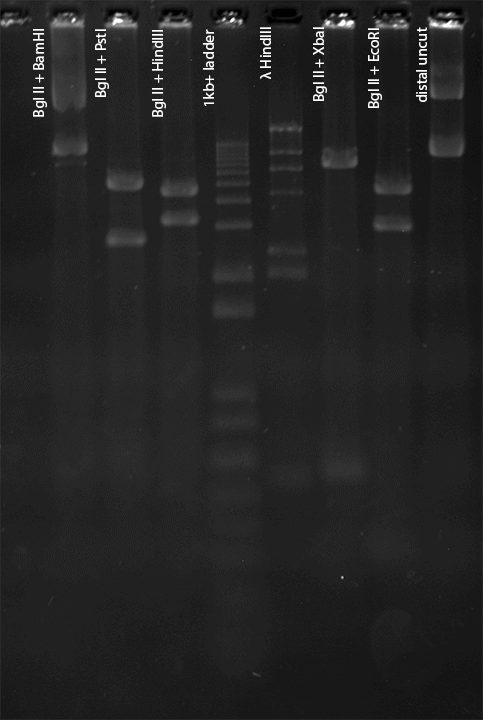 What you see above is DNA samples for my experiment (designated as pRIT4501, a recombinant plasmid of pUC9 vector and pBAC insert), digested with enzymes that cut DNA at specific locations. Forth lane from left, that’s what we call as 1kb+ molecular weight standard, or ladder. Ladder functions as ruler, because we know the size (measured in bases) of the bands. Next to 1kb+ ladder, there is another ladder known as λ HindIII (bacteriophage λ DNA cut with HindIII restriction enzyme), which is also a ruler. With those as rulers, we can estimate the size of the DNA samples (lane 1 - 3, 6 - 8).

Why we use 2 rulers? Because redundancy is great for validation.

By using the 1kb+ molecular weight standard as our example here to illustrate data visualization with graph, here is how the graph looks like when it is presented on linear scale. 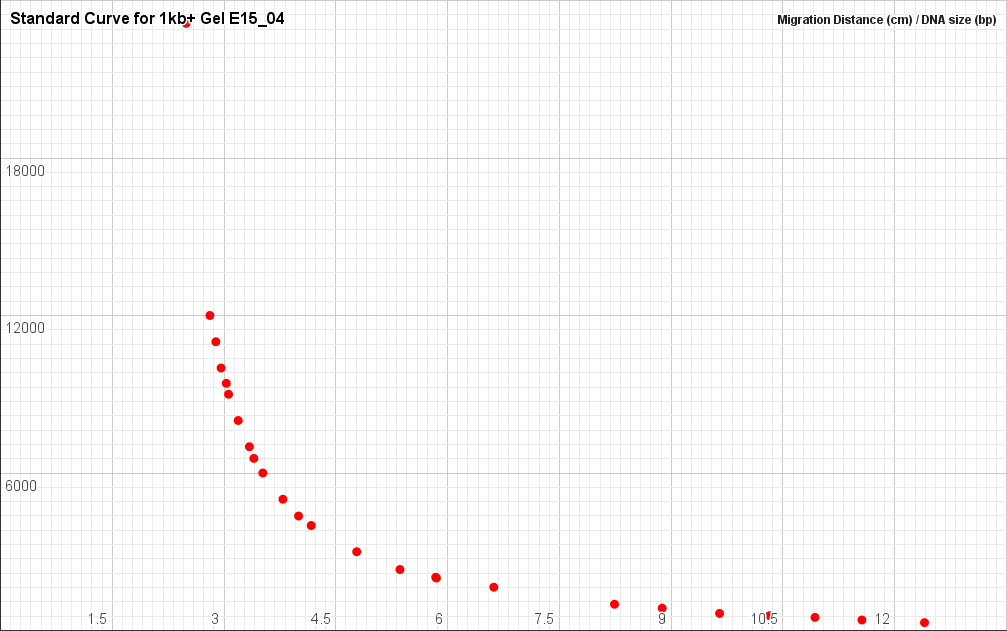 Now, let’s compare it when presented on logarithmic scale. 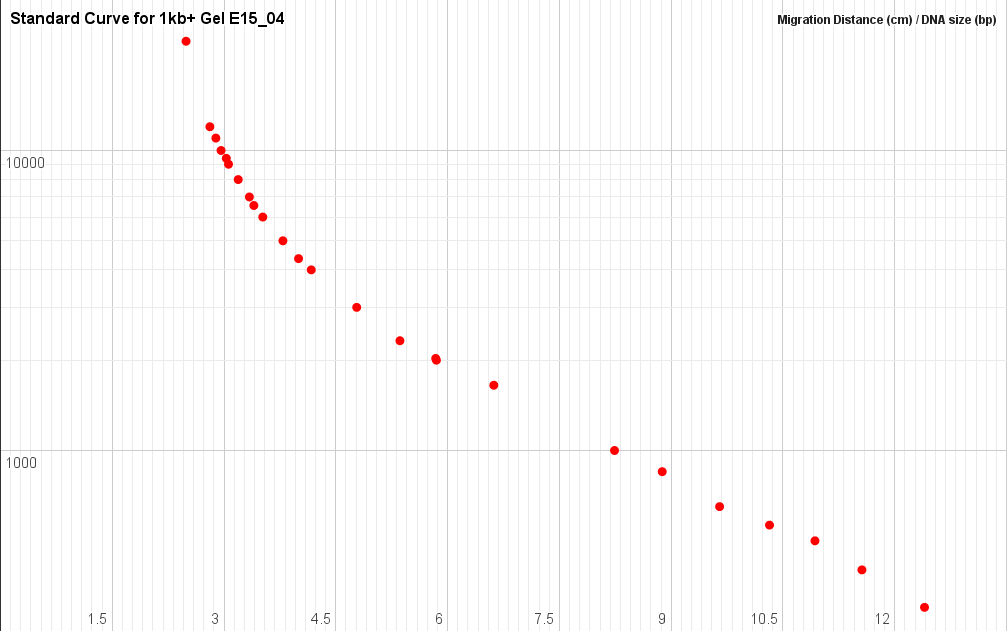 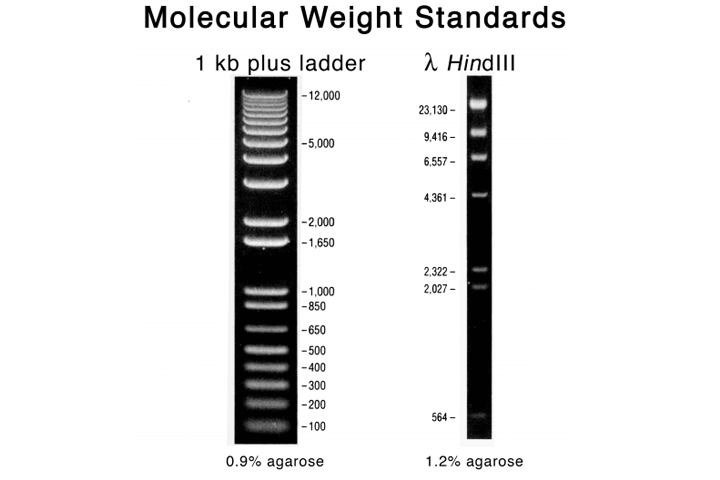 Look closer at the spacing between bands for the molecular weight standards. To make it easier, let me list down the size of the bands for 1kb+ ladder in unit bases:

The changes are incremental, but in linear scale the changes start to look a bit extreme when you switch from 100 - 1,000 bands to 1,000 - 10,000 bands. On linear scale, these changes will make the graph jumps. But here it is not the numerical values we only care about, but the rate of change of the distance between one band to another. On logarithmic scale, this nuance feature is pronounced better.

Another reason is that logarithmic scale makes it easier to deal with large numbers. Going from 100 to 12,000, that’s huge. On linear scale, the graph will look disproportionate, but not on logarithmic scale.

his name is John

John Napier (1550 - 1617), from Scotland. You know what, he spent 20 years of his life to construct logarithm. (I wish he had computers so he could be more productive.) in 1614, he published his invention. His way of dealing with numbers by using logarithm was picked up by a famous astronomy, Johannes Kepler, and thanks to logarithm, Kepler had achieved a great success with his calculation on planetary orbits. After that, logarithm was quickly picked up by researchers all around the globe. 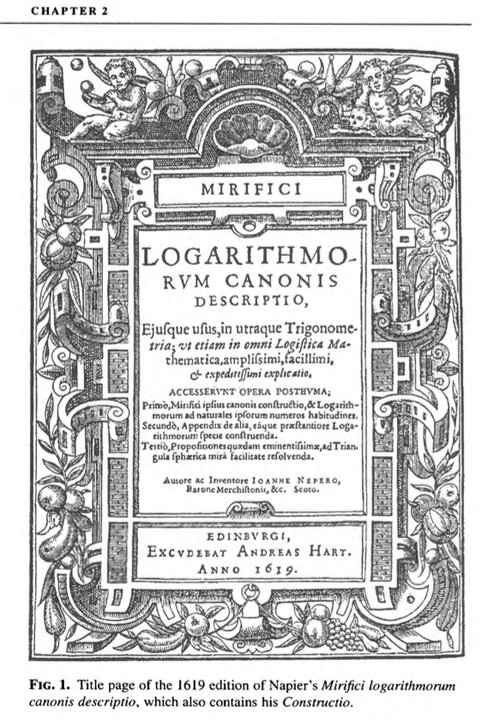 Long ago, scientists spent huge amounts of time computing numbers on paper. Logarithm effectively gave them a longer productive life by cutting the time they spent doing arithmetic. How does logarithm do this?

That’s hard for me to tell, but I can refer you to other materials that can explain better.

Seriously I didn’t expect I was going to write this long.